Three design movements have always been my favourite which is why, following the Arts and Crafts trail, someday I have to end up in Glasgow to see the work of Charles Rennie MacIntosh, or for Art Deco to New York for the Chrysler Building and a few other things, and as far as my greatest design love, Art Nouveau, keep going back to Barcelona for Gaudi and his compatriots (though there is so much all over other parts of Europe as well).

Arts & Crafts. And might as well throw in Frank Lloyd Wright here too (yes, they call him Prairie but to me he’s pretty close to this), so its back to Chicago and actually make the trip out to his houses. Here’ s a great new reference to this style. But back to Charles Rennie Mackintosh (1868-1928). 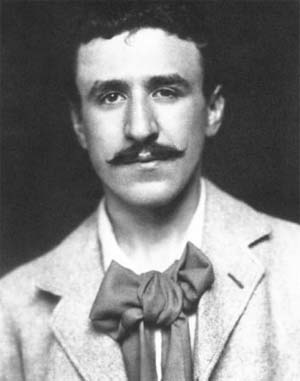 Quite the tie and bow on otherwise the manliest looking of men.

Not unlike Frank Lloyd Wright’s chairs though Wright’s were even more rectilinear; his would not have had the upper oval portion.

This one forward to Art Nouveau or perhaps more Jugendstil .

But there is another good reason to stumble into Glasgow as well.

The Whiskey Live show: barrels of Scotch in the open air, one price to sample as many as you are capable of sampling. Coming to Toronto in October 08; I do believe I might have to wander out there.

← Some News, Some Art
You just can’t hide that inner glow.. →